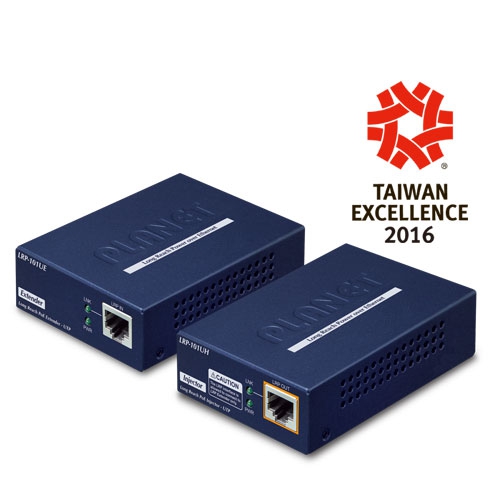 Convenient PoE over UTP Extender in Harsh Environment
The LRP-101U-KIT, a PLANET Long Reach PoE solution, is a Single-port PoE over UTP Extender Kit featuring long range data and power transmission for distance up to 500m (1,640ft.) over UTP cable, and another 100m over Ethernet cable to remote PoE IP camera, PoE wireless AP or access control systems complied with 802.3af/at PoE. The LRP-101U-KIT provides point to point application for easy plug-n-play operation and deployment in climatically demanding environments with wide temperature range from -20 to 70 degrees C. Without the problem of power source, it makes the installation of remote PoE powered devices easier and more efficiently.

The LRP-101UH transmits data and power over UTP cable to the LRP-101UE, which can be located as far as 500m away. It will then deliver the data and power output with a maximum of up to 25 watts to a PoE PD over Ethernet cable, thus expediting the IP surveillance network or wireless LAN infrastructure in long distance. Both of the two products come in a compact but rugged metal housing. Their wall-mounted design fits easily in any space-limited location.

IP Ethernet and Power over Long UTP or Twisted-pair Cable
A normal UTP cable can only be extended up to 100 meters, but the LRP-101U-KIT can extend PoE networking up to 500 meters (1,640ft.) over long 4-pair UTP cable or up to 300 meters (1,000ft.) over an existing 1-pair twisted-pair cable, such as telephone wire, with stable, high-quality video transmission. It eliminates the need for additional remote site power while allowing a single power source to provide power to both LRP extenders and the PoE IP camera at long range.

Stable Operating Performance under Difficult Environments
PLANET Long Reach PoE Extender Kit is the perfect solution for distance extension for PoE or non-PoE networking for warehouses, parking lots, campuses, casinos, and many more. They can operate stably under temperature ranging from -20 to 70 degrees C to enable the users to conveniently operate the kit in almost any location.

Plug-n-play Installation
With the plug and play feature, PLANET Long Reach PoE Extender Kit can be used immediately without the need of configuration and is also compliant with all kinds of IP network protocols. Moreover, the rich diagnostic LEDs on the front panel show the operating status of the individual port and the whole system, enabling the administrator to efficiently manage the network.

The LRP-101U-KIT can function in two different kinds of combinations:

Type 2: LRP-101UH with 48~56V DC power input and LRP-101UE with PoE power output
The LRP-101UH injector is powered via the DC power adapter and it transmits data and power over UTP cable to the LRP-101UE extender. An IEEE 802.3at/af compliant PoE PD will then automatically be powered by the LRP-101UE via UTP cabling.